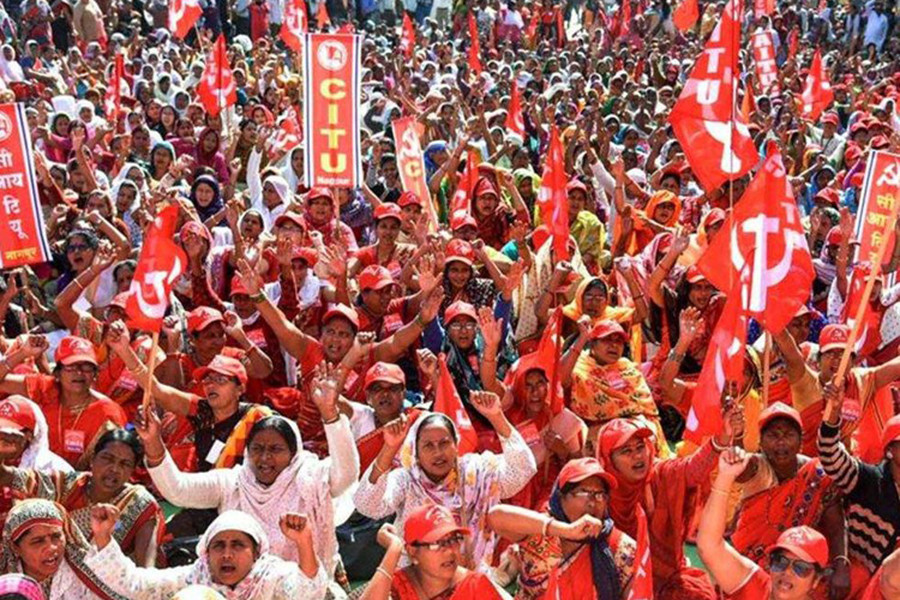 In India, where 220 million workers went on a stike, women played an important role. The Indian woman Srishti Yadav wrote about the demands of women and their strike position.
Srishti YADAV // India

A nation-wide strike of historic proportions took place in India on January 8-9 2019. The All India General Strike, which was brought about by the participation of 220 million workers, was called by 10 central unions demanding an end to the pro-corporate and anti-labour policies of the Modi government (1). In particular, the Strike was in protest of the continuing labor law reforms which aim to increase ‘labour market flexibility’ by streamlining and amending existing labour laws (2). Worker raised their voices against the steady worsening of living conditions due to the increasing contractualisation of work and erosion of social security. In particular, the strike saw significant participation from women workers in both the organized and unorganized sectors, despite repression by the State. Women workers have been an integral part of workers movements especially in recent times. This is because even though according to official statistics only about 30% of women are in the workforce, according to other estimates about 75% of women are workers, and out of the total working women as many as 94% are employed in the unorganized sector (3).

THE MOST IMPORTANT DEMAND: MINIMUM SALARY FOR ALL WORKERS

Of the women working in the unorganized informal sector, half are the primary breadwinners of their household. Thus, steady price rise and the reduction in state support in public distribution of grains have a direct impact on these women workers. Within the informal sector, women workers are concentrated in jobs such as domestic work, construction work, garment work, work as petty vendors etc.- all of which are highly irregular, more often than not do not provide even a minimum wage and are compounded by gender based underpay. Women workers are protesting the ir-regularity of work and pay and are demanding minimum living wage for all employments in both the organized and unorganized sectors.

A major trend in labor market reforms has been the emphasis on flexibility- to achieve international competitiveness in production conditions and attract foreign capital, the governments keep to make labor policies ‘hire and fire’ friendly. The focus is on short-term flexible contracts that can be set up and ended at minimum notice. Laws are also being modified to minimize the regulation and safety evaluation of workplaces, to ‘ease’ overtime work, decrease social security contributions of employers and further leave these contributions open to stock market fluctuations. This causes immense uncertainty in the lives of workers and in protest workers are demanding mandatory pension and social security cover (4) for workers in all sectors. The Anganwadi workers for example, who had struck work in December, joined the strike on January 8-9 to echo their unmet demands for minimum wage, pensions and social security cover which are under threat due to the neoliberal polices of the government aimed at replacing grassroots public healthcare with insurance-based privatization of the health sector a la America.

Another aspect of the contractualisation and deregulation of work is that workers often have to undertake multiple jobs at a time to secure a livelihood.

This is particularly severe for women workers who often have to do unpaid care work and household chores (by most estimates unto 7-8 hours a day) apart from working outside the household which can both paid and unpaid (in the form of agricultural labour on the family field, helping other family members etc.). Thus women workers have strong demands for an upward hike in minimum wage and the application of a standard minimum wage for all types of em-ployments as well as a regularization of the workday. The striking workers are also protesting the government’s weak stance on maternity benefits - workers are demanding access to creches at or near the workplace and maternity leaves, something the government has deemed applicable only to workplaces with more than 50 workers. This leaves much of the unorganized sector out of the purview and is effectively useless for a large mass of working women.

As the neoliberal policies of the State have intensified, so have worker’s protests. Women workers are particularly vulnerable due to the hidden nature of their work but if this strike is any indication one can hope that they will play a key role in future struggles.